Bait showed, Reds showed, Tarpon showed….. like I said, it went from nothing to wide open overnight!

Ok, straight to the good stuff.  Team FishIBX consisted of 3 anglers this year, John LoGelfo, Clay Willis and myself.  Clay and I have fished together before and John has been both a friend and customer of mine that quickly grabbed the open invite sent to my Facebook following.  I was glad John jumped at the shot as he’s always wanted to chase Tarpon with me and this time his work schedule allowed the opportunity.

With the fish just coming in a week before the tournament Clay and I didn’t have much time to pattern but we both put in some long hours hunting.  Prefishing, what I had was scattered but things were tightening up and Clay found some action putting a fish to the boat the Thursday before the tournament.  On game day we had narrowed our window and developed a plan.  Running to our fishing grounds we spotted some fish,  and decided to make a stand.  On several occasions we had fish in the lines but no takers.  On a decision to leave fish to find fish we made the call to go on the hunt.  The water was in my opinion too thick and the fish were not going to eat until the tide changed.  Now on the move I wanted to find a pod of fish in clear water.  We hit some singles that got our attention and then a pod.  I maneuvered the boat in and everyone executed our plan perfectly.  Explosion!  4 jumps off the hook set followed by an enduring fight of added jumps and cut backs.  Clay kept the hook stuck as the team worked together judging all the moves and minimizing obstacles.  As we settled in, a few adjustments on the Peen Reel kept added pressure, once we had our shot everything came together like planned.  Clay held steady while I wrapped the leader and John got the time stamped money shot that tilted us Champion!  What an awesome adventure and competition as the majority of the teams were in fish for a good portion of the day.  Awesome work guys! 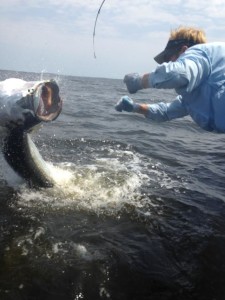 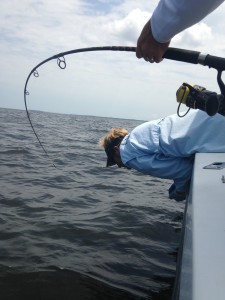 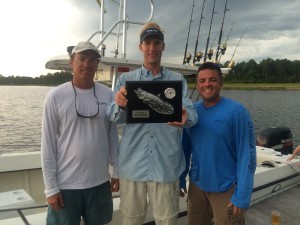