The Striped Bas run on the  Lower Roanoke River has been shadowed for decades.  It’s hay-day was long before the internet gained traction and folks posted FB / Instagram reports.  Even magazines miss highlight the run.  Somehow April and Dogwoods get traction for when and Weldon gets the where.  It’s time to revaluate the Roanoke when it comes to Stripers.

Years ago the lower river was mostly a cut bait fishery which collapsed with the loss of the Herring.  The once busy shore buzz from Herring shacks are now silent.  The lower Striper fishery used to be fresh Herring or Herring gills but due to depleting stocks, rules changed.  The fishery was replaced with $1.00 pc. dead shad minnows attached with a receipt and all the lingo.

As the longest standing Striper Guide on the Lower Roanoke River, I simply decided to use artificial lures which in turn opened my eyes to overlooked opportunities.

Decades ago when using Herring,I fished when Herring were available.  My thought process was that was the time when Rockfish were “running”.  Well casting lures opened my eyes to a Winter fishery that is second to none.  As a professional guide I never post numbers, let’s just say Winter Striper fishing on the Lower Roanoke is something you don’t want to miss!

Book a trip if you want to see what it’s all about, fly or light tackle. 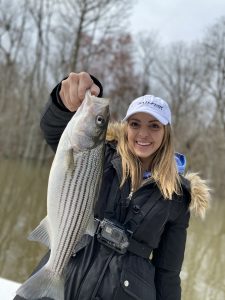