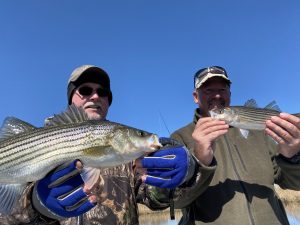 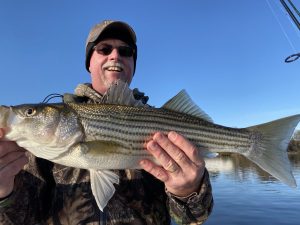 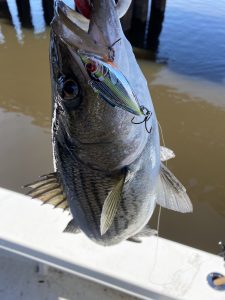 The Pamlico River is closed when it comes to keeping Striped Bass, but that doesn’t prevent anglers from catching.  Simultaneous to the recreational closed season, commercial nets also found new boundaries.  Once, commercial nets were set all the way up to the R.R. trestle in Washington.  This segment of river tends to hold Stripers most of the year due to perfect salinity, food sources and so forth.  Today the net zone finds itself bound further East.  Maybe this will resolve some of the issues that plague the Stripers.  The future will tell.

Though Stripers are found throughout the entire Pamlico River, the new net boundary allows a good portion of the “Striper Zone” to flow free of webbing.  Between the closure of keeper season on the Rec’s and keeping a prime zone of river free on tangle, the Striper has to see rapid improvement.  Yes, Stripers that become gilled, entangled or bagged in gear or deep hooked by an angler will result statistically as cryptic mortality, maybe even bycatch. These are  terms acceptable by managers and maybe even used to shield the unknown even known in some cases..

So where does all this lead?  In the past year, I’ve seen a huge increase in Striped Bass numbers throughout the Pamlico’s new “restricted zone”.  In previous years, I’ve always turned to the Roanoke River in late Winter and early Spring to catch Rockfish numbers that I thought were worthy of a “For Hire” guide.  I believe under the current regulations the Pamlico has made a drastic turn.  A turn for the fish!  The fish are now living longer plus increasing in numbers by my observations.  From a guide perspective, catchable numbers are now in check with Roanoke hay days.

I’ve fished the Pamlico hard over the years to keep a check on the Stripers. Steadily comparing the catch rates from the Pamlico to the Roanoke.  There was no comparison.  Well, until this year!  So has the Pamlico Striped Bass responded that quickly to the new rules in play or was it a scenario of stars aligning.  Don’t know….

Either way, what I’m getting at, if you like to catch Stripers, give me a shout.  If it’s not about keepers and it’s all about the experience, we just might hit the Pamlico and avoid the packed ramps of the Roanoke “keeper season”.  If keepers are a must, please don’t forget I was raised on the Roanoke!